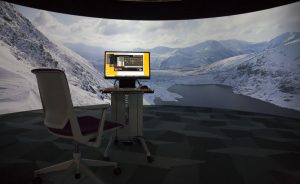 This spring, as part of a unit on Nature and Nation in my North American Arts course,  I created an assignment that would allow my students to physically engage one of nineteenth-century painter Thomas Moran’s “big picture” landscapes and the contemporary 360-degree video on global environmental and immigration issues Exit (2015), created by Diller Scofidio + Renfro, Mark Hansen, Laura Kurgan & Ben Rubin, in collaboration w/ Robert Gerard Pietrusko & Stewart Smith.  https://dsrny.com/project/exit

With the help of GIS librarian Amanda Tickner, I took advantage of the 360-degree immersive visualization room in the MSU library’s new Digital Scholarship Lab http://digitalscholarshiplab.msu.edu to allow students to better engage the sense of scale and grand visual experience of nature Moran intended to evoke.  Exit presents a panoramic display of data from 2008-2015, which visually represents global human movements due to various environmental, economic, and political forces.  By immersing the viewer with such a grand, dynamic scale of data, the artists provided an overwhelming and compelling statement about the problematic state of the planet and its residents.

This lesson was the culmination of three weeks of lectures, discussions, and readings focused on the visualization of nature by North American artists.  Classes were organized around various media and environmental philosophies or issues.  Lectures featured early nineteenth-century through early twentieth-century artists from a variety of cultural, racial, and gender backgrounds.  I was inspired by art historian Alan Braddock’s recent article, “Ecology > Nature,” American Art 31, no. 2 (Summer 2017): 59-61, to create a writing assignment where students would compare and contrast Moran’s The Grand Canyon of Yellowstone (1872) to Exit.

After reading William Cronan’s chapter “The Trouble with Wilderness,” in Uncommon Ground: Rethinking the Human Place in Nature, William Cronan, ed. (1995), students explained in an essay why Moran’s painting exemplified Cronan’s problem with many American’s conception of wilderness as remote, rural, and isolated from humans; they then explored why Exit might align with the author’s solution for “rethinking the human place in nature.” In order to apply Cronan’s argument to current environmental dilemmas as engaged by Exit artists, students were asked to consider how they might find wilderness in their own urban spaces, homes, towns, apartments, campus, etc., in order to reinforce responsible behavior towards nature and disenfranchised peoples.