Students in Professor Laura Smith’s Spring 2013 HA491 Special Topics: The History of Photography class developed stereoviews as part of their final project.  Smith and the late Val Berryman created this assignment in conjunction with the MSU Museum’s current exhibit Adventures in Time & the Third Dimension: Stereoviews. http://museum.msu.edu/?q=node/242  A stereoview is a 3D photograph created by taking two offset photographs of the same scene.  These images mimic the separation of space between the eyes.  Both two-dimensional images are then combined in the brain to give the illusion of 3D depth.  During the stereo craze in the mid-19th c., photographers used specialized cameras with two lenses that would take a simultaneous stereo view.   While some of Smith’s students worked with their digital cameras; others simply employed their camera phones. 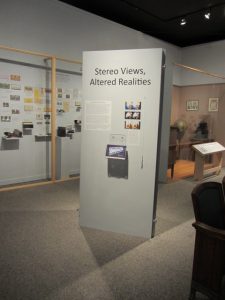 rhetoric of the early stereo companies.   As argued by Judith Babbitts, nineteenth-century dealers of stereoviews frequently asserted that stereoscopic realities were superior to the physical world.  They persuaded people that stereoscopic vision would enhance natural eyes.  Companies stipulated that through the 3D illusion, “one’s reality was expanded.”  Yet, many stereoviews blinded vision as much as they seemed to augment it.  The required use of a stereoviewer to see the images confined individuals to a space conceived as natural, but was framed by a subjective photographer’s eye.

In order to undermine this rhetoric, each student’s images challenge or contradict the enhanced realism of stereoscopic vision.  They overtly manipulate the content or the composition.   For their stylistic or conceptual inspiration, the students selected and researched a photographer whose work engages ambiguity, playfulness, fantasy, or the unexpected.